Tap into the local beer scene 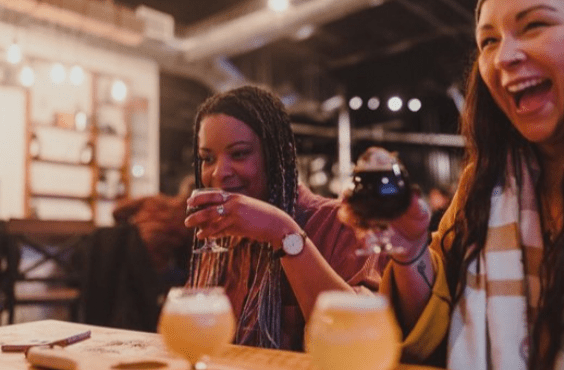 The craft beer is flowing in Moncton and Southeastern New Brunswick. Whether you’re celebrating for the evening or making an afternoon crawl through town, you’ll find more than just local flavours, but unique spaces to soak up while you sip.

🍺 Where to start? How about with Acadie-Broue, the first Acadian microbrewery! The first beer launched by Acadie-Broue was the Tintamarre, a Belgian-inspired seasonal beer. The second beer they concocted was La Patente, a Sticke Alt beer traditionnally brewed in Germany. Acadie-Broue beer is available at the Le Coude bar on the Université de Moncton campus, at Dolma Restaurant, and occasionnally at the Laundromat and the Tide & Boar Gastropub. The microbrewery is located at 382 St. George Street in downtown Moncton.

🍺 Tire Shack Brewing Co. is located in a 4,400-square-foot building, converted from the long-running Tire Shack auto garage. A recent addition to Moncton’s beer scene, this brewery features an open concept brewhouse and taproom, along with a retail shop selling cans and growlers to go.

🍺 Find plenty of unexpected options at Tide & Boar Gastropub, which curates a list totally unique to the area and brews its own beer with a small microbrewery system on site. The reserve beer menu changes often, and you’ll be hard pressed to find these at your local liquor store.

🍺 Tide & Boar Gastropub has opened a full-size microbrewery—Tide & Boar Brewing—at a new location downtown. Enjoy the new full tap room with its great selection of beer on draught and an appealing food menu. You can even purchase your favourite Tide & Boar Brewing beer, now available in cans, to take home.

🍺 Happy Craft Brewing is a small-batch craft brewery located on Moncton's Main Street that offers a wide range of artisanal beers, from very accessible ales and lagers to more diverse and eccentric styles for the adventurous craft beer enthusiast.

🍺 Gahan House prides itself on beers made on site with only the freshest ingredients, with no additives or preservatives. Take home any of Gahan’s fine ales and discover a new favourite.

🍺 The Pump House BrewPub offers five different types of its own finely crafted bottled beer, eight on tap and in kegs and several more that come and go with the seasons. Proudly brewed in New Brunswick since 1999, Pump House is a favourite of discriminating beer drinkers across Canada.

🍺 Next up, try the newer guys in town, CAVOK Brewing, launched in 2018 by Serge Nadeau and Serge Basque as a small-batch home-based brewery. CAVOK, an aviation term that stands for “cloud and visibility OK,” entered the wider market in 2019.

🍺 Located in the Dieppe Industrial Park, Flying Boats Brewing Company gives a nod to the history of transportation in southeast New Brunswick through its company name and the naming of its full-bodied and flavourful craft beers. The Station Master Stout, the Delta 8 American Wheat, the Empress Irish Red Ale, and the Dixie Clipper IPA are just a few examples. Pay a visit to the Flying Boats brewhouse and tap room where local beer enthusiasts converge.

🍺 Great folks making great beer and offering daily growler fills on site. At Celtic Knot, the selection seems to be growing almost daily, so there’s always something new to try.

🍺 And for a truly unique experience, head to the Holy Whale Brewery located in a former church in Alma, a village on the edge of Fundy National Park in southeastern New Brunswick. Holy Whale shares the building with Buddha Bear Coffee, a café and roaster. Or, check out Holy Whale Beer Hall across the bridge in Riverview to get a taste of this delightful beer.