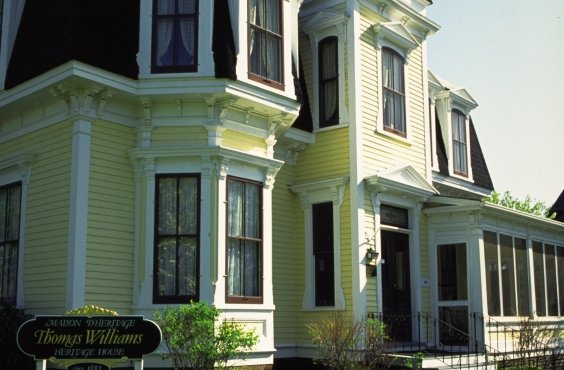 Immerse yourself in Moncton’s rich history amid this bustling modern city by paying a visit to our historic homes, museums and other unique tributes to the region's past.

Built between 1939-1940, the Cathédrale Notre-Dame de l’Assomption is a good example of the religious Gothic Revival architectural style. This grey sandstone cruciform structure features a prominent square bell tower and many of the interior adornments stand alone as significant artistic achievements by local Acadian artists and artisans.

Did you know? The cathedral is also home to the MR21 - Monument for Recognition in the 21st century, an interpretation centre that uses cutting edge digital technology to help visitors discover this heritage gem and learn about an often-overlooked facet of Acadian history!

Restored to its original 1821 style, the Free Meeting House is one of the city’s oldest standing public buildings. The purpose of this national historic site was to serve as a home for all religious denominations until individual groups could raise the money required to build their own churches.

Treitz Haus is one of Moncton’s oldest standing heritage buildings (c. 1769), named after Jacob Treitz, one of the Pennsylvania-German settlers who arrived in 1766 to establish the Monckton Township.

Built in 1883, the Thomas Williams House was the home of prominent Monctonian Thomas Williams, who was the treasurer for the Intercolonial Railway. This municipal heritage site stands as an elegant symbol of local life during the Victorian era.

With more than 38,000 objects and photographs in its collection, the Acadian Museum of the Université de Moncton houses one of the world's largest collections of Acadian artifacts.

Check out the Facebook posts below on the Resurgo Place’s Facebook page for interesting facts on some of Moncton's iconic historic buildings: